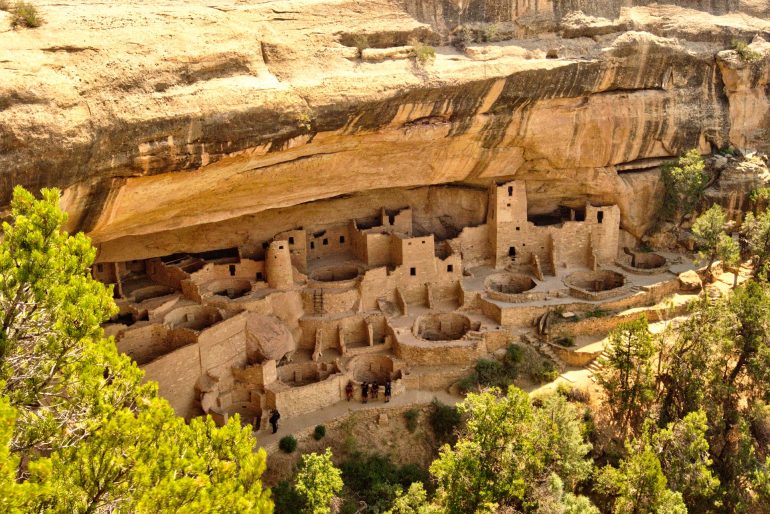 Photo by Wallace Bentt on Unsplash
This post probably contains affiliate links. We earn a small commission (at no extra cost to you) if you purchase from them. For more information read our Privacy Policy and Disclosure.

Mesa Verde National Park is a unique national park sure to capture the imagination of your kids. Kids have a chance to get up close and personal with the ancestral Pueblo people’s cliffside dwellings, including clambering down ladders and walking cliffside trails.

Mesa Verde National Park is in Colorado, but near enough to Utah to include in a Mighty 5 or Grand Circle road trip.

Mesa Verde National Park has a different feel than the other national parks in the Four Corners region. Instead of unique natural features, it is the unique dwellings nestled in the cliffs that draw you in.

Learning more about the ancestral Pueblo cultures also reminded us that they didn’t disappear. Their descendants are thriving in the modern Pueblo tribes of today, such as Hopi and Zuni.

Planning a Trip to Mesa Verde with Kids

Know Before You Go

Mesa Verde National Park is open year-round. However, the cliff-dwellings tours are closed from late September to late May. We highly recommend visiting during the months when all the facilities are open.

We visited in early September and had beautiful daytime weather and no crowds! You can see details on park opening hours here.

Things to Do in Mesa Verde National Park with Kids

If you only have one day in Mesa Verde, focus on Chapin Mesa. You can see all the main sights, including a cliff dwelling tour, in one day. With a second day, you can add on Wetherill Mesa activities.

Carved into sheer cliffs, cliff dwellings are the star of the show at Mesa Verde National Park. No trip to Mesa Verde with kids would feel complete without a cliff dwelling tour. Wait until your kids find out they can go inside!

You can only visit the cliff dwellings on a ranger-led tour. Ranger-led tours can be booked on recreation.gov, up to 14 days in advance (starting at 8:00 am MST).

With younger kids, I recommend one cliff dwelling tour. With teens, you may want to consider two. If you add an extra day for Wetherill Mesa, one at each location would work for any age group.

Tickets online or in-person? You may have read elsewhere that tickets are available in person at the visitor center. That’s old info. Tickets are only available online 14 days in advance. Plan accordingly.

Our favorite cliff dwelling tour is Balcony House on Chapin Mesa. This tour is described as an “adventurous cliff dwelling tour” and we like an adventure! The adventure comes primarily in the form of the two long ladders on an open rock face and crawling through a 12-foot-long tunnel. We had an excellent ranger guide – informative and dry-witted.

Cliff Palace is the most popular cliff dwelling. Over 100 people used to live in this dwelling, the largest known one in North America.

Other cliff dwellings you can visit are Square Tower House, Mug House, and Spring House. Check out the descriptions of the various cliff dwellings and the physical requirements of the tours to pick one that’s right for your family.

The Mesa Top Loop features 10 stopping points. You can even listen to a National Parks audio-tour on the way. We recommend stopping at Far View Sites, Sun Point View, and Square Tower House Overlook.

One activity in the Junior Ranger book is a Mesa Top Loop scavenger hunt.

The Far View sites differ completely from the cliff dwellings. Ancestral Pueblo people lived in these cliff-top villages 200 years before some of them moved to the cliff alcoves.

The Far View sites are interesting, but depending on your kids, your mileage may vary. We visited Hovenweep and Canyons of the Ancients the day before as part of our Grand Circle road trip. The kids were more excited to go back to the campground and play hide and seek than look at more pit houses and tower houses.

How to Visit Hovenweep National Monument

Sun Point View is a stop on the Mesa Top Loop Road. The viewpoint has free telescopes for a superb view across to Cliff Palace.

Spruce Tree House is the best-preserved cliff dwelling in Mesa Verde. Sadly, rock falls forced the dwelling to close to visitors. You can catch a good view from an overlook near the Chapin Mesa Archaeological Museum.

Your kids can pick up their Mesa Verde Junior Ranger book at the Visitor and Research Center near the park entrance. Gentle Rain, a fictional girl who lived here 750 years ago, shares her life and culture through the book’s activities.

Aspiring Junior Rangers must complete the “Being a Good Steward” activity plus 3 additional activities. The Junior Ranger’s age will determine how deep they need to go in each activity.

Once you complete the activities, Junior Rangers can get sworn in at either the Chapin Mesa Archaeological Museum on Chapin Mesa or the Visitor and Research Center near the park entrance.

If you aren’t familiar with the National Park’s Junior Ranger program, you can read our complete guide.

Mailing a postcard is a small, but cool act. Mesa Verde National Park has its own zip code and post office. In fact, it’s the second smallest post office in the USA.

The Mesa Verde postmaster was extremely friendly and even let the kids cancel the stamps “Mesa Verde NP” on the postcards they sent.

In case you’re wondering, the smallest post office is in Ochopee, FL, and does not even have a bathroom for the postmaster!

You will need to stay inside the park to enjoy this one. If you do, let the kids stay up late for some old-fashion star gazing. No telescope needed!

Once our flash monsoon storm cleared, we enjoyed clear skies and, at 8500 feet (2600 meters), amazing views of the Milky Way, Mars, and more stars than you can imagine.

People say that Bryce is the best park in that area for astronomy. Bryce was great, but we thought Mesa Verde was better.

We stopped at the Chapin Mesa Archaeological Museum and watched the introductory video. Normally, we like the overview videos at the national parks. This one felt like an outdated recap of what we already learned on the Balcony House tour. The museum exhibits themselves were underwhelming, other than the large dioramas of the technological progression of the ancestral Puebloans.

I would only stop here if you aren’t able to tour a Cliff Dwelling.

The Chapin Mesa Archaeological Museum is closed for renovations in 2022. I’m hoping it will be fresher and more interesting when it reopens.

Spend a Day at Wetherill Mesa

Where to Stay at Mesa Verde National Park with Kids

Morefield Campground, 4 miles inside the park, is a huge campground (267 sites!) open from early May to mid-October. Two of the loops are tent-only.

The campground has a store, coin-operated laundry, complimentary showers, and The Knife’s Edge Cafe. From Memorial Day to Labor Day, there is also a Ranger station at the campground.

We camped in Morefield in early September. We felt like we had the huge campground to ourselves. Be forewarned, the first afternoon we had a thunderstorm and monsoon rain (yes, the desert rains in the southwest are officially called “monsoon”) that tested the waterproof-ness of our tent. Thankfully, it passed the test!

15 miles into the park is Far View lodge. We did not stay here, but it’s in your budget, it is the closest lodging to Chapin and Wetherill Mesa. Far View Lodge is open from mid-April to mid-October.

The “fancy” Metate Room restaurant is located here with a more casual Far View Lounge upstairs. Both are only open for dinner. We ate at the Far View Lounge and the view was, well, far…and incredible!

A short walk down the road is the cafeteria-style Far View Terrace, which serves some combination of breakfast, lunch, and dinner depending on the time of year. A coffee and ice cream bar is in the same building.

Given the long drive to Chapin Mesa or Wetherill Mesa from the park entrance, I recommend staying in the park if you can. If that’s not possible, then try to stay in the nearby towns of Mancusco or Cortez.

The Four Corners region is rich with Ancestral Pueblo people sites. On our Grand Circle road trip, we visited both Canyons of the Ancients and Hovenweep National Monument. For those heading to Page, Arizona, the Navajo National Monument is on the way.