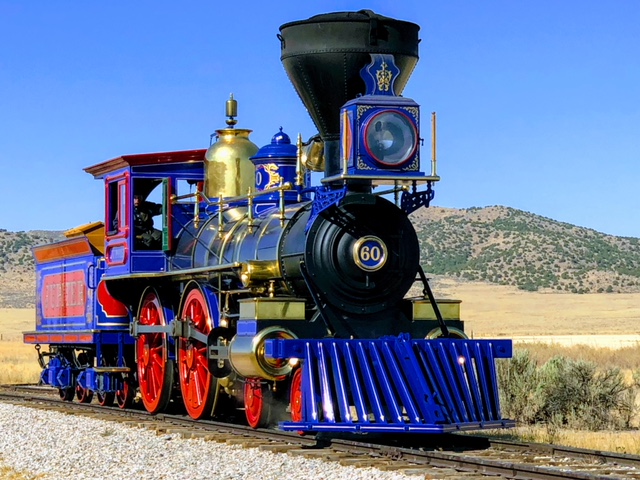 We spent a morning visiting the Golden Spike National Historic Site (NHS) in Promontory Summit, Utah. The site commemorates the completion of the Transcontinental Railroad on May 10, 1869, when the Union Pacific Railroad met the Central Pacific Railroad.

This is a convenient overnight stop if, like us, you’re road-tripping from Washington or Oregon to visit Utah’s Mighty 5 or complete a Grand Circle road trip.

The Transcontinental Railroad shortened the coast-to-coast travel time from 6 months to 7 days! Imagine building all that by hand. The Central Pacific Railroad started from the west. The Union Pacific started from the east. After six long years, the final golden spike was hammered into place!

Want to see one of these spikes today? You won’t find them at the Golden Spike National Historic Site. The Golden Spike and Nevada’s Silver Spike found their way to the Stanford Museum, Arizona Territory’s spike is in the Museum of City of New York, and the second gold spike is lost.

Things to Do at Golden Spike NHS

Golden Spike NHS has a small Visitor Center with a film describing the events of May 10, 1869, and a good display of railroad building techniques. Outside is the real fun!

From May 1st through mid-October, there is a locomotive demonstration.  The Jupiter arrives from the west at 10:00 am, followed by the No. 119 from the east at 10:30 am.  Make sure to time your visit for this demonstration!

During the locomotive demonstration, the ranger does a great job of sharing anecdotes about building the replica locomotives, the Driving of the Last Spike ceremony, and more.  We shared a few of them here but kept plenty secret for your visit.

Saturdays between Memorial Day and Labor Day, there is a full reenactment of the Driving of the Last Spike Site ceremony. We visited on a weekday, but the reenactment sounds entertaining, especially if you know someone picked for audience participation.

There are also hiking and auto tours to view the transcontinental railroad grade that workers were building in 1869. We did not have time for any of these tours.

Yes, the Golden Spike NHS does have a Junior Ranger badge. Batty and Falcon are enthusiastic Junior Rangers and try to complete them at every National Parks site we visit.

The Golden Spike Junior Ranger book covered railroad building techniques and the history of the “Last Spike.” Batty and Falcon easily finished the book in our two-hour visit.

For junior rangers ages 3 to 5, they offer a special Junior Fireman Program.

If you need an introduction to the Junior Ranger program, check out our complete guide.

Where to Stay Near Golden Spike NHS

The closest lodging is in Brigham City. Because Golden Spike NHS is just 40 minutes off of I-83 you can stay in a variety of locations up and down I-83 and still make the 10:00 am locomotive demonstration.