The Complete Guide to Planning a DMZ Tour with Kids 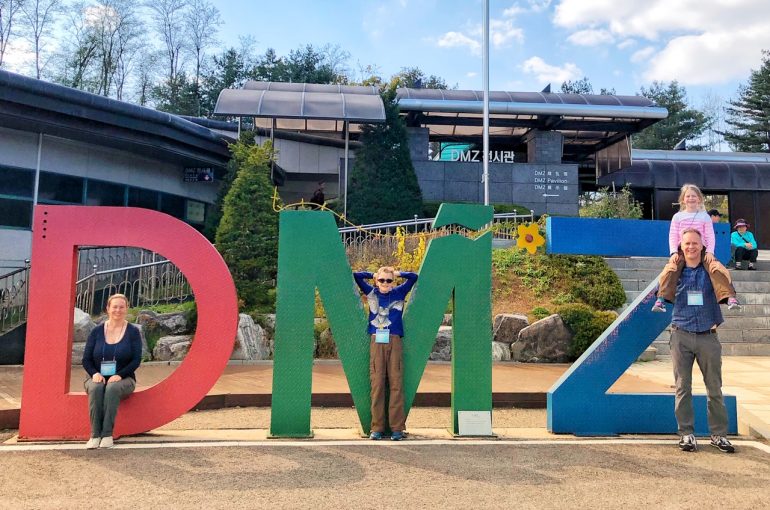 Are your kids asking about North Korea and why it is in the news so often? On your next trip to South Korea, visit the DMZ. A DMZ tour is an informative and memorable experience for all family members to learn about the Korean War, Armistice, and reunification progress. A visit to the DMZ is one of our top recommendations for kids in Seoul. Read on to learn everything you need to know to plan your visit to the DMZ with kids.

JSA or DMZ Tour with Kids?

The first question families usually ask is – should I do a JSA tour or a DMZ tour with kids? That’s a great question. Let’s walk through what you need to consider before you decide.

First Consideration – Are Your Children 11 or Older?

DMZ tours do not have an age limit – children of all ages are allowed.

Second Consideration – Are You Seeing What you Want to See?

Read the itinerary carefully and make sure you’re seeing what interests you. The main JSA sites are Freedom House and the Conference Room. For most people, the real draw of the JSA tour is the Conference Room, because you can stand at the back of the building in North Korea without visiting North Korea. Photo op!

Most JSA tours combine some DMZ sites with these (see further down this post for details on DMZ sites). This means that a JSA tour will take a full-day while a DMZ tour is half-day. You need to decide if the Conference Room photo op is worth the extra time.

Many people wonder if they will enjoy “just a DMZ tour.” We wholeheartedly think that you will! A DMZ tour visits many interesting and important sites. That’s why most JSA tours include some of them in their itinerary.

What are the DMZ and JSA?

Let’s start with a quick rundown on all these acronyms.

The Korean Armistice Agreement (1953) established the Korean Demilitarized Zone (DMZ) as a buffer zone between North Korea and South Korea. The DMZ divides the Korean Penninsula roughly in half. It is 250 km (160 mile) long with a 2 km (1.25 mile) DMZ on each side (for a total width of 4 km).

Historically, the Joint Security Area (JSA), also called Panmunjon, was the only portion of the DMZ where North and South Korean forces stood face-to-face. You might recognize it as the blue building that hosted negotiations between North and South Korean government officials. Those buildings were neutral zones and sat astride the South/North Korea border.

The JSA attracts tourists because you can stand in North Korea without visiting North Korea. Visitors enter the UNC Military Armistice Command, walk to the back of the building, and take a photo physically standing in North Korea. In October 2018 (while we were in Seoul!), North and South Korea announced they want to change the JSA to a tourist attraction. When that happens, tourists will be able to cross the military demarcation line which runs through the JSA so they can reenact Kim and Moon’s April 27, 2018 crossing. The precise logistics of all this are pending.

In the meantime, the JSA re-opened for tours on May 1 2019, with a far more peaceful vibe. The entire South Korean side has been de-mined and guards no longer carry weapons. You can also view the tree planted by North and South Korean leaders during the Panmunjom summit of April 2018.

When to Tour the DMZ?

DMZ tours are offered every day except for Monday and Korean national holidays.

Who Can Go on a DMZ Tour?

DMZ tours are open to tourists of all ages and nationalities. Each person, including children, must have a current valid passport on the day of travel. Don’t forget! They will be checked at the military checkpoints.

Below we will describe the sights on a typical half-day DMZ tour and some special considerations with kids. The tour you book may visit different sights or in a different order. Read the tour details carefully to ensure the sights you want to see are included on the tour you’re considering. Most tours leave Seoul around 8:00 am and return around 2:00 pm.

Tours typically have a standard pick-up location. You are responsible for getting to the pick-up spot at the appointed time. If your accommodation is not conveniently located to the pick-up location, your tour may offer hotel pick-up at an additional cost. The advantage of hotel pick-up is that, well, you’re picked up. The disadvantage is that you don’t know where you will fall in the pick-up schedule. For example, we were picked up first and spent nearly one hour on the bus before arriving at the standard meeting point.

Once everyone has been picked-up, you will start the drive to the DMZ sights. The bus ride is approximately 1.5 hours after the last pick-up. Our bus had lap-belt seatbelts.

The bus ride went quickly and was very informative. Our guide talked about the Korean War, the social and economic consequences of the divided nations and key events during the divided Koreas. Whether or not reunification happens, it was interesting to learn about the DMZ before we saw any sights. All the information was child-appropriate and they were open to questions.

Imjingak Park is located 7 km from the Military Demarcation Line (5 km from the DMZ). The area hosts various monuments and relics related to the Korean War and dreams for Korean reunification. Don’t miss the viewing platform on the top of Imjingak building.

Dorasan Station is located 650 meters (710 yards) from the southern boundary of the DMZ. It is the closest train station to the North Korea border. It was opened in 2002 in the hopes of Korean unification – a train line connecting Seoul, South Korea and Pyongyang, North Korea. Now we just need trains to actually use it! Four times a day a tourist passenger train arrives from Seoul but goes no farther.

Dorasan Station has immaculate bathrooms and a baby changing area.

Peering through the Dora Observatory’s binoculars allows an unobstructed view into North Korea. The observatory has plenty of room for children to run around. You may not photograph the sensitive military area below the lookout, delineated in yellow.

Kijong-dong is one of two villages permitted to remain in the DMZ (the other is Daeseong-dong in South Korea). Despite North Korean denials, all evidence suggests that Kinjong-dong is uninhabited. The windows are glass-less, the buildings are empty, and the lights and elevators run at pre-set times.

The bathrooms at Dora Observatory are clean and adequate, but no baby changing area.

The Third Infiltration Tunnel is one of four known tunnels under the border between North Korea and South Korea. Located in 1978, the tourist entrance to the tunnel is only 435 meters (1,427 feet) from the North and South Korea border. The tunnel could accommodate 30,000 armed men per hour and would have spewed the North Korean army into South Korea a mere 43km (27 miles) from Seoul.

Sorry, no photos! Photographs are not allowed inside the 3rd Infiltration Tunnel. They made us lock our mobiles, bags, and purses in the free lockers. You may take a water bottle.

Hard hats are required for the walk into the 3rd Infiltration Tunnel. The initial 350 m (1,150 ft) ramp is steep but wide. At the bottom of the ramp, you are 73m (240 ft) below ground. At this point, the tunnel narrows to a 2m tall and wide…and sometimes shorter. Adults will need to walk bent over…how much depends on how tall you are. Three concrete barricades block the tunnel just before the Military Demarcation Line. At this point, you are only 170 m from North Korea!

Claustrophobic? If you or your kids don’t like enclosed spaces, being deep underground, or breathing stale air, then stay up top. Our family left one adult and child up top and everyone was happy.

Before or after your tunnel visit, you will be invited to watch an [overly]dramatic film about the DMZ, Korean War, and Third Infiltration Tunnel. The movie includes war scenes. Consider your child’s age and temperament before viewing the film.

The bathrooms at the 3rd infiltration tunnel are adequate with a toddler-sized toilet, but no baby changing area.

Unless you have an unfulfilled desire to purchase ginseng, make sure the DMZ tour you book is a “no shopping” tour. Many tours obfuscate the final shopping stop. Make sure you check the tour details carefully.

Alternatively, you can save yourself the research hassle and book the same tour as us. The tour guide was excellent, you stop at all the sights described above, and hotel pick-up is included. Drop-off is at either City Hall Subway Station or Myeongdong Lotte Hotel. On top of all that goodness, no shopping tour.

If our recommended tour won’t work for you, several different tour companies run tours. Be sure to check the itinerary carefully to make sure it includes your preferred sights.